A practicioner of dark arts. 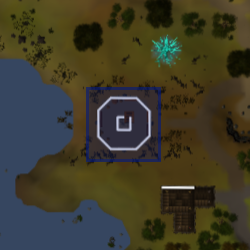 Zandar Horfyre is a dark wizard found on the top floor of Dark Wizards' Tower. He is also involved with Fairy Tale Part I. If a player selects the "No, I think I'll stay a while." option when talking to him, he will teleport the player to Lumbridge Swamps near the Zanaris hut, and the player's character will say "Zamorak curse that mage! I guess he already has!". This is one of the faster and free ways to get to the Zanaris hut, albeit it isn't widely known.

Horfyre is known to certain Fairies of Zanaris, such as Fairy Nuff, whom he has great respect for, due to his owing her a great deal when she saved him from a mortal injury when he was investigating the nature of Otherworldly beings, who reveals that "he has spent many years studying magical illness". Horfyre is shocked when he discovers that the Fairy Queen is seriously ill, calling it 'grave news', and appears to possess some knowledge of Tanglefoots and Fairies, whom he says have essences of 'pure magic' and 'magic embodied'. Horfyre also knows of the necromancer Malignus Mortifier and his battle with a Tanglefoot many years ago.

He appears to be the "teacher" or master of all the Dark Wizards in the tower.

Retrieved from "https://runescape.fandom.com/wiki/Zandar_Horfyre?oldid=24562406"
Community content is available under CC-BY-SA unless otherwise noted.