RuneScape Wiki
Register
Don't have an account?
Sign In
Advertisement
in: Members' items, Items that are reclaimable on death, Grand Exchange items,
and 24 more
English

View source
watch 02:56
Raise a Floppa - The Loop
Do you like this video?
Play Sound
"Zaryte" redirects here. For the race, see Nihil.
For this item's augmented variant, see augmented zaryte bow.

A powerful bow imbued with the fury of Zaros.

A broken bow imbued with the fury of Zaros. 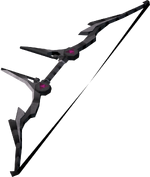 The Zaryte bow is an enchanted Zarosian bow that requires 80 Ranged to wield. Released on 10 January 2011, it is dropped by Nex, the Zarosian leader of the Ancient Prison in the God Wars Dungeon, as well as the four nihil in The Pit of Freneskae. The Zaryte bow is a tier 80 Ranged weapon, with accuracy equal to the royal crossbow, Attuned crystal bow or dual-wielded chaotic crossbows with royal bolts, and equivalent to the Melee chaotic maul. Like the crystal bow, the zaryte bow supplies its own ammunition, removing the need for players to use and manage their own arrows while using it.

After firing 60,000 shots (auto-attacks only), the zaryte bow degrades and requires repair before it can be used again. Bob the Smith in Lumbridge can repair the bow at a price of 20,000 coins per percent of charge or 2,000,000 coins for a full repair, thus pricing each arrow/shot at approximately 33 coins (if using Bob for repairs). Players with an armour stand in their player-owned house can repair the bow themselves for a decreased cost according to their Smithing level (up to a 50% discount for a player with 99 Smithing and utilising the boost provided by a Smithing cape).

Wielding a zaryte bow, or wearing any piece of Torva, Pernix, or Virtus armour, will cause all factions of monsters in the God Wars Dungeon (aside from the monsters in the generals' rooms and Zarosian monsters in the Ancient Prison) to become unaggressive.

When received with CoinShare active, the Zaryte bow will be dropped as 120 zaryte bow shards split evenly among the players and sent directly to their banks. 120 shards can be combined to create this item.

Because all weapons of the same tier deal equal damage (setting aside the 50% increase from two-handed weaponry or dual-wielding, which all the below weapons share), the zaryte bow deals the same damage as the royal crossbow (with royal bolts) and dual-wielded chaotic crossbows (with royal bolts). Thus, if it does not matter whether you use arrows or bolts, any of the three weapons will be equally effective.

The royal crossbow is the weapon of choice for many high-level rangers. Because its components only cost 357,584 coins, as opposed to the zaryte bow's 8,816,585 coins, the crossbow is typically the best choice for players who meet the requirements and do not have a lot of money. (The actual forging of the crossbow, it should be noted, is not considered to be easy). Alternatively, players who find themselves dungeoneering frequently may prefer buying the main and off-hand chaotic crossbows for 300,000 (200,000 main hand + 100,000 off-hand) tokens which, for many players, could be considered easier than earning the cash for a Zaryte bow or withstanding the Queen Black Dragon's intense fire-breath. The attuned crystal bow is also comparable to the Zaryte bow. At level 90 smithing, an attuned crystal weapon seed is granted to the player after completion of Plague's End, which means that if a player has 90 Smithing beforehand, the attuned crystal bow costs nothing to obtain. At level 99 Agility, the attuned crystal bow is roughly 3% better than the Zaryte bow, though it does not provide a prayer bonus. A player who has the requirements, or can easily get the requirements, would save the entire cost of the Zaryte bow by obtaining an attuned crystal bow instead, making it significantly cheaper.

The bow does not require ammunition, as it generates its own arrows. It can be wielded in the God Wars Dungeon for complete protection from all factions outside the boss rooms and the Ancient Prison - the Shard of Zaros has the same functionality. Also, the Zaryte bow will typically last much longer in combat than the royal crossbow and chaotic crossbows. It will last for approximately 50 hours of auto-attacks, compared to only 10 for the royal and chaotic crossbows. If the player is using abilities, the Zaryte bow will only use one of its 60,000 charges per kill. This enables it to last an extremely long time, making it ideal for long trips. Because the Zaryte bow degrades very slowly, it will rarely require recharging. Thus, while it may have a high initial purchase price, it will be cheaper to use in the long run compared to the royal and chaotic crossbows.

The base repair cost of the Zaryte bow when completely degraded to 0.0% item charge is 2,000,000 coins. It can be repaired by: