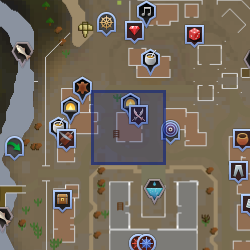 Zeke is the owner of Zeke's Superior Scimitars in Al Kharid. He sells scimitars up to mithril. If asked about dragon scimitars, Zeke will say "The banana-brained nitwits who make them would never dream of selling any to me. Seriously, you'll be a monkey's uncle before you'll ever hold a dragon scimitar." This is a reference to the Monkey Madness quest which must be completed to wield a dragon scimitar, and in which the player pretends to be the uncle of a Monkey Child. If the player has completed the quest, they will respond with "Hmmm, funny you should say that...".

He is also involved in Treasure Trails, where one of the possible clues will tell the player to speak to him.

Retrieved from "https://runescape.fandom.com/wiki/Zeke?oldid=24562329"
Community content is available under CC-BY-SA unless otherwise noted.