Start a Wiki
Not to be confused with Zemouregal's Base.

Zemouregal's fort is a manor located east of Trollweiss Mountain, in The North. It is currently under the ownership of the Mahjarrat Zemouregal, which was given to him by Zamorak, for assisting him in his rebellion against Zaros. It can currently be accessed through the cellar by navigating Lamistard's Tunnels from the west, during and after The Curse of Arrav quest, or by entering through the front door from the Mahjarrat Ritual Site during and after the Ritual of the Mahjarrat quest.

During The Curse of Arrav, the player enters Zemouregal's fort but is attacked by Arrav. However, before Arrav can be killed, he is called away.

During The Ritual of the Mahjarrat, the player must use decoder strips to enter the front door. Once inside, the player must search a few crates to find the heart magic notes, which reveal that the further away Zemouregal is from Arrav, the stronger his resistance will be. Thus, he made a prism from a magical stone to strengthen his grip, but the stone failed to function. In the volcano on Karamja, Zemouregal found some obsidian, out of which he made a working prism. He hid in the fort to prevent the clumsy zombies from breaking it. The player overhears that Zemouregal's zombie army is in full strength, and that Arrav is in position. Lastly, the player smashes the black prism on the first floor, mentioned in the notes as strengthening Zemouregal's control over Arrav.

The fort is also used to store prisoners caught by Undead broavs that roam the ritual site.

Zemouregal can be found in his study on the top floor before and after the Ritual along with Sharathteerk.

During Dishonour among Thieves the player comes here to recruit Zemouregal and Enakhra for Zamorak's team to steal the Stone of Jas from Sliske. During and after the quest, players can find a chest here containing 5,000 coins, 250 Dungeoneering tokens, and 3 noted cut emeralds. Looting this chest is a requirement for the master quest cape. To reach the chest it is suggested to loot it during the quest when you are teleported there. Alternatively, one can go there later by bringing a sled to Trollweiss Mountain and enter the cave entrance to the east. Run east through the cave and go up the stairs from the cellar. If one has completed Ritual of the Mahjarrat, the easiest method is to teleport to the Glacor Cave using the fairy ring code DKQ, exit the cave to the Mahjarrat Ritual Site, run west to the fort, and use the main door. 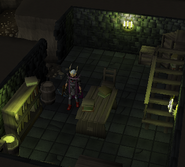 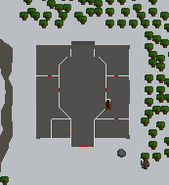 Zemouregal's fort on the minimap
Click an image to enlarge

Retrieved from "https://runescape.fandom.com/wiki/Zemouregal%27s_fort?oldid=21822639"
Community content is available under CC-BY-SA unless otherwise noted.