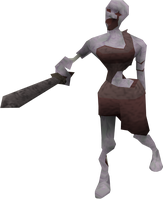 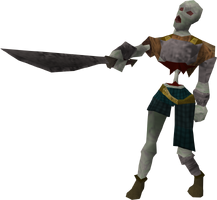 Zombies are a form of undead found all over Gielinor, appearing in several different locations, most often in graveyards, dungeons and tombs. Like Skeletons, they are the result of Necromancers reanimating the bodies of the dead.

Zombies have a wide variety of combat levels and appearances, but they generally attack with Melee, and have a low resistance to magical attacks, particularly fire spells.

Many types of zombies exist, including armoured zombies, undead ones, zogres, zombie hands, monkey zombies, zombie pirates, zombie swabs and dried zombies. When given a Slayer assignment for zombies, any zombie-class creature may be targeted, including those such as undead chickens and cows.

Many zombie locations are far from banks. For players wishing to slay zombies and bank their drops, the following zombies are close to banks:

Zombies are one of the 'races' who have a lesser champion in the Champions' Challenge Distraction and Diversion. To fight the Zombie Champion, the player must kill zombies until one drops a Champion's scroll, a very rare drop.

Whilst undead ones count towards a zombie slayer task, they do not drop Champion's scrolls. 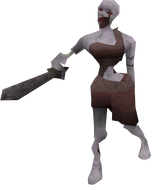 An average and common zombie. 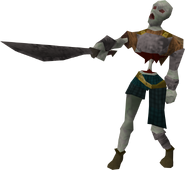 A zombie found in the Stronghold of Security, among some other places.

A different zombie with a mutilated face. 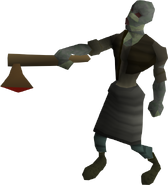 A male zombie at the Graveyard of Shadows.

A female zombie at the Graveyard of Shadows.

Another male zombie at the Graveyard.

A zombie in the Chaos Tunnels.