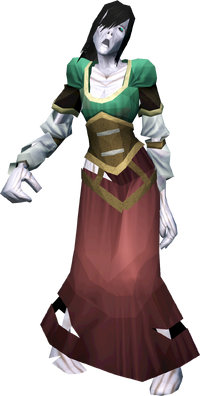 Zombies are monsters that can be found randomly on Uncharted Isles, alongside armoured versions. They may be killed for combat experience and chimes. While not aggressive, they are accurate and can hit hard if players are unprepared for combat. The zombies are usually found in large groups making it very dangerous to use area-of-effect attacks or abilities against them.

Attacking the zombies will scale their life points and combative abilities to the player's own combat level.

The zombies will always be found near an overturned cauldron with potions laying about; this acts as their respawn point.

During Final Destination, the player encounters zombies that are identical to those found on Uncharted Isles but grant no experience.

Retrieved from "https://runescape.fandom.com/wiki/Zombie_(Uncharted_Isles)?oldid=21214479"
Community content is available under CC-BY-SA unless otherwise noted.